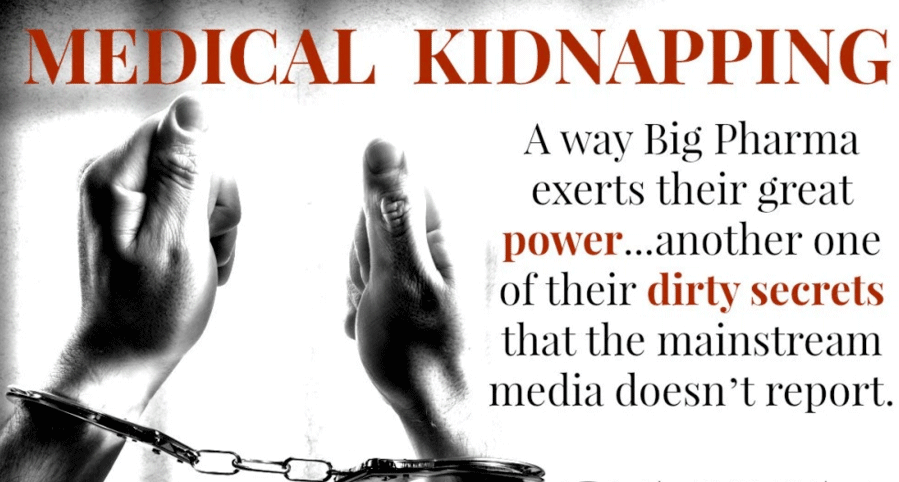 Every once in a while you hear a story that you think to yourself, “no possible way is this real!!!”. You research, reading through article after article trying to find an “Onion” article disproving it. Then inevitably, if you were unable to disprove it, the harsh reality sets in.

The Truth About Cancer (TTAC) just sent out a great post on this subject. We wanted to contribute to this story by sharing a short clip from our Doctored film you need to watch!

Here’s the article I mentioned from TTAC on the issue, I think it’s absolutely worth the read.

Big Pharma has another dirty secret that mainstream media is intentionally keeping from you. Nope, it’s not another pharmaceutical class-action lawsuit for killing and maiming thousands. Nor is it the suppression or intentional sabotage of a natural substance for the treatment of cancer. This is something that is every parent’s horrifying nightmare… especially a parent who is well educated in natural and alternative health.

Imagine, just for a moment, that you get the devastating news that your 10-year-old son has been diagnosed with cancer. As a good parent, you want to learn as much as possible about treatment options and you immediately scour the web for information. In your research, you see that chemotherapy is the standard of care. You also see that chemotherapy is toxic and that it is actually carcinogenic.

You then read some of chemotherapy’s short-term effects: loss of appetite, mouth sores, nausea, vomiting, hair loss, and so on. In addition, you read the potential long term effects of chemotherapy: damage to the heart, reproductive organs, kidneys, bladder, nervous system, lungs, and more. You also see there is about a 20%, five-year survival rate for your child’s cancer using chemotherapy.

Through your investigation, you find that there are many different natural and non-toxic treatment options. Some of them sound promising. You decide to research cancer centers that use these treatments and call a few to ask questions. You choose one and make an appointment for a week from then.

In the meantime, you call the oncologist’s office, tell them you’ve chosen a different route and that you won’t be coming for your son’s appointment. You hang up feeling good about your decision.

The Role of Child Protective Services in Medical Kidnapping

Three days later Child Protective Services (CPS) shows up at your door. They say they need to take custody of your child. As they are leaving with your son, you are in total disbelief, crying and yelling at them as your 10-year-old is screaming your name for help, asking what is happening. Your child has been taken away from you. The state’s CPS has literally kidnapped him to force your son to do conventional chemotherapy against your will.

The reality is that this scene is not from a movie and it is not a bad dream. Sadly, this is happening today in the United States of America, and it’s legal. What’s more, it’s intentionally being hidden from you by the U.S. mainstream media – Fox, CNN, CBS, ABC, you name it. Medical kidnapping, as it is called, is another way that Big Pharma exerts their enormous power and is another one of their dirty secrets that the mainstream media doesn’t report.

A Real Medical Kidnapping in Action

Tonya Brown was faced with difficult decisions for her son Christopher after he was diagnosed with chronic myeloid leukemia (CML), an extremely rare form of cancer in children. The overseeing physician at Phoenix Children’s Hospital, Dr. Jessica Boklan, recommended 12 weeks of oral chemotherapy followed by a bone marrow transplant.

As with many mainstream doctors recommending these treatments, there is often pressure to begin immediately. Tonya agreed to the chemotherapy, but had reservations about the bone marrow transplant due to the fact that the transplant was coming from an unmatched donor and the success rate was less than 20%. In addition to the low success rate, these procedures are excruciatingly painful.

According to Health Impact News:

“Christopher responded better than many to the chemo treatments, but still they made him very sick. He begged his mother to stop making him take the chemo.

As the time approached for the bone marrow transplant, Tonya made the decision to have Christopher delay going through the treatment, and what others had described as agonizing pain associated with the procedure, until they tried other, less invasive options first. She wanted the perilous bone marrow transplant to be the last resort.

After 10 weeks of chemotherapy, Tonya stopped the treatment. At home, she began juicing and treating him with a strict diet that has been recommended for cancer. She used nutritional therapies and they prayed and believed God for healing.”

Eighteen months later, Child Protective Services paid an unexpected visit to Brown’s house (reportedly ordered by Dr. Boklan) to find a healthy child with lots of energy. Upon taking Christopher back to Phoenix Children’s Hospital, CPS was waiting. Christopher was ordered to begin another round of chemotherapy that day. Tonya’s request for a second opinion was denied on the spot and, under duress, she reluctantly agreed to another round of chemotherapy for her son.

After 20 days, Tonya was ordered to leave the hospital as her 8-year-old child was taken from her custody. It was at this point that the CPS stepped in, Christopher became a ward of the state, and the bone marrow transplant proceeded against Tonya’s will.

It was later discovered that Dr. Jessica Boklan considers herself (from her own testimony in court), to be the world’s leading authority on chronic myeloid leukemia − Christopher’s type of cancer. She has co-authored and is conducting numerous research studies involving children, cancer, and experimental drugs. The question seems obvious; might Christopher have been one of Dr. Boklan’s  guinea pigs to further her research?

Is Big Pharma Really Allowed to Use Children as Guinea Pigs?

It is a fact that many pharmaceutical companies that make cancer drugs have been given the green light to research experimental therapies aimed at children with rare cancers. However, due to parental concerns, candidates are often hard to come by.

The pharmaceutical industry is one of the largest, most lucrative, and most powerful in the world; perhaps only dwarfed by the oil industry. This allows for virtually unlimited funding – payola incentives to doctors and agencies to get them trial participants. In the case of medical kidnapping by CPS, when children are removed from their parents, they become wards of the state. Once this designation is made, these children can legally be entered into experimental drug programs and essentially used as guinea pigs.

Too Much Power and Forced Gag Orders

The case of Tonya Brown’s son Christopher is one of many that revolves around children with rare forms of cancer being removed from their parents, only to begin experimental treatment against the parents’ wishes. It is important to also understand that children’s courts do not operate like normal courts. In fact, former Georgia State Senator, Nancy Shaffer described the Child Protective Services reach as “unlimited power.” Charges can be based on simple, unfounded statements, and documents are sealed from public scrutiny.

Along with losing custody of their children, it is customary for parents to be served with gag orders against making any of the information about the case public. It is because of those brave parents and journalists that go public against court orders that we are even able to hear about these cases at all. It is therefore impossible to truly know how widespread this situation has become. Judging by the heightened coverage of alternative media, and increasingly the mainstream media, what we are seeing may only be the tip of the iceberg.

Fortunately, Congress is listening and has enacted H.R. 4989, which states:

“To prohibit Federal funding of any treatment or research in which a ward of the State is subjected to greater than minimal risk to the individual’s health with no or minimal prospect of direct benefit.”

Even with this enacted bill that limits Federal funding, the anti-freedom trend of medical kidnapping is increasing and it’s essential that this insanity be exposed in order for it to be stopped! When a parent’s autonomy over treatments they decide to give their sick child is forcefully removed by government, it is time for the entire country to ask itself… “what kind of future are we allowing to emerge?”

What do you think of children being forced to do medical treatments against their parent’s will?