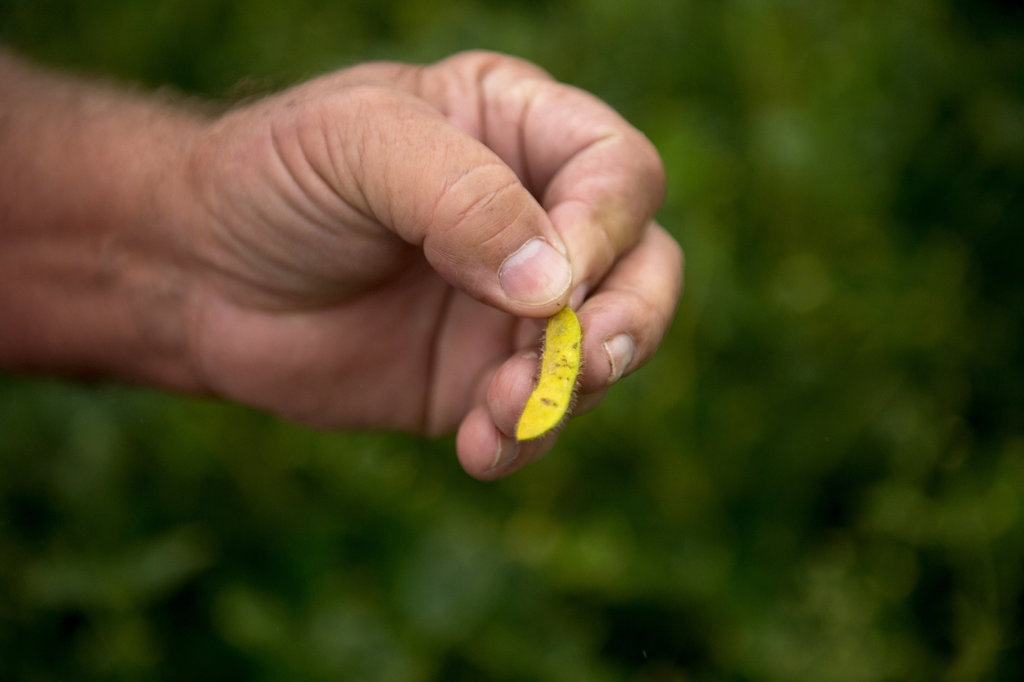 Michael Kemp with part of a soybean plant that was damaged by the weed killer dicamba on his farm in Missouri.

Twenty-five million acres have been planted with genetically modified seeds to encourage the spraying of the chemical. Farmers worry about damage to crops.

Farmers planted a new kind of seed on 25 million acres of soybean and cotton fields this year. Developed by Monsanto, the seeds, genetically modified to be resistant to a weed killer called dicamba, is one of the biggest product releases in the company’s history.

But the seeds and the weed killer have turned some farmers — often customers of Monsanto, which sells both — against the company and alarmed regulators.

Farmers who have not bought the expensive new seeds, which started to appear last year, are joining lawsuits, claiming that their crops have been damaged by dicamba that drifted onto their farms. Arkansas announced a 120-day ban of the weed killer this summer, and it is considering barring its use next year after mid-April. Missouri briefly barred its sale in July. And the Environmental Protection Agency, not known for its aggressiveness under President Trump, is weighing its own action.

“I’m a fan of Monsanto. I’ve bought a lot of their products,” said Brad Williams, a Missouri farmer. “I can’t wrap my mind around the fact that there would be some kind of evil nefarious plot to put a defective product out there intentionally.”

Yet he has been dismayed both by damage to his soybean crops, which were within a wide area of farmland harmed by dicamba and by the impact even to trees on his property. Leaves, he said, were “so deformed you couldn’t even really identify the differences between them.”

The dispute comes as American agriculture sits at a crossroads.

Genetically modified crops were introduced in the mid-1990s. They made it possible to spray weed killers — chiefly Monsanto’s Roundup — on plants after they emerged from the ground, ridding fields of weeds while leaving crops undamaged. 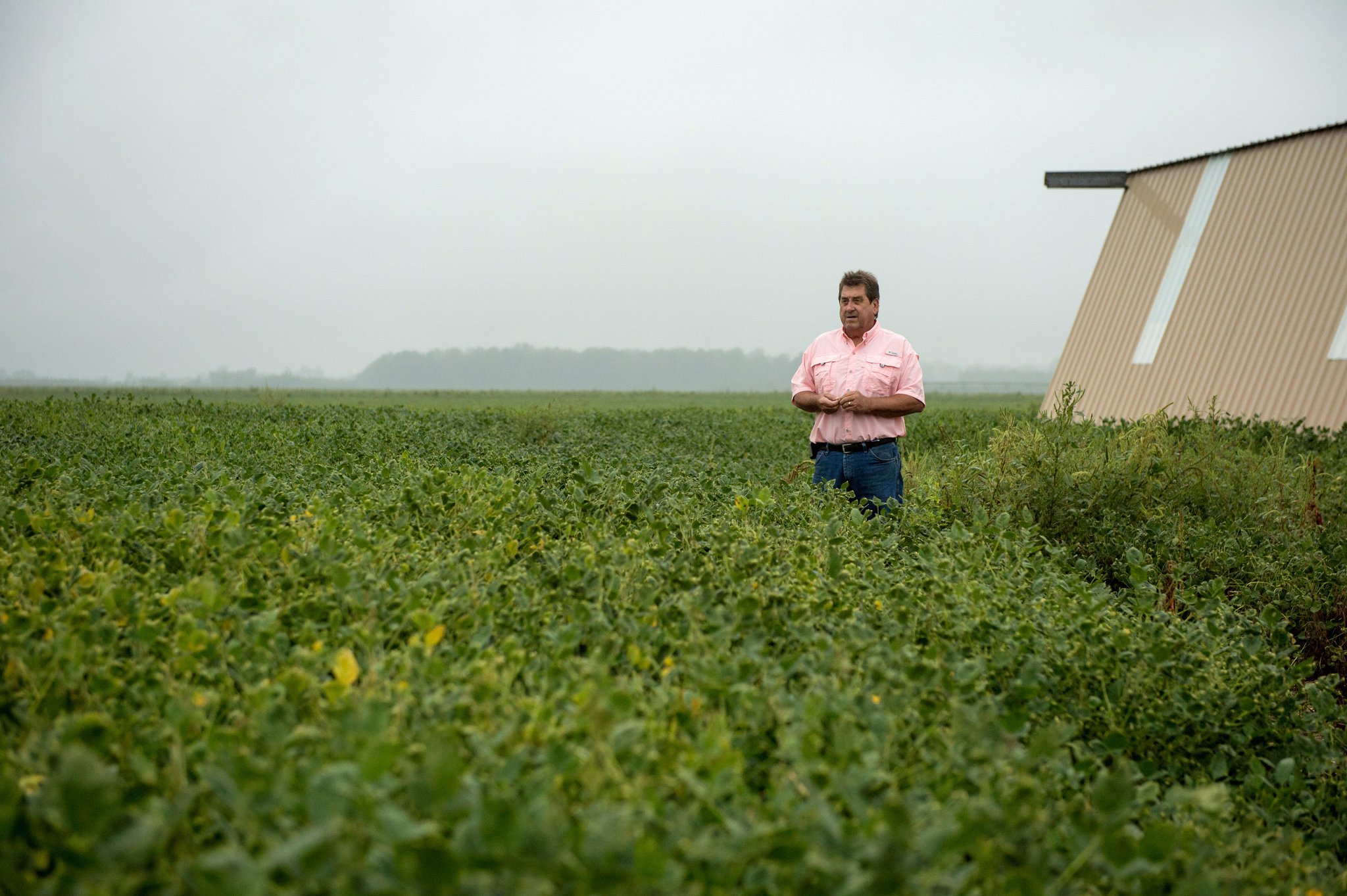 Mr. Kemp in a field of soybeans on his farm.

But weeds are becoming more resistant to Roundup, so the industry is developing seeds that are tolerant to more herbicides. Environmentalists and some weed scientists worry that making seeds resistant to more weed killers will increase the use of pesticides.

Monsanto and another company, BASF, have also developed a new, less volatile version of dicamba, which has been around for decades. DowDuPont, which has its own dicamba-resistant seed, is introducing crops resistant to 2,4-D, another old herbicide.

Monsanto formally challenged Arkansas’ ban earlier this month, insisting that 99 percent of its customers were satisfied. It plans to double the use of its new dicamba-resistant soybeans seeds to 40 million acres by next year.

“New technologies take some time to learn,” said Scott Partridge, Monsanto’s vice president for global strategy. “Thus far, what we’ve seen in the field, the vast majority, more than three-quarters of them, has been due to not following the label.”

The company has also claimed that Arkansas’ decision was “tainted by the involvement” of two scientists tied to a rival, Bayer. Considering that Bayer is acquiring Monsanto, it was an awkward step. Bayer called the men “pre-eminent weed scientists.”

Some foresaw drift problems with dicamba.

For years, Steve Smith, once a member of a dicamba advisory panel set up by Monsanto, urged the company to change course. Mr. Smith, the head of agriculture at Red Gold, a tomato processor based in Indiana, aired his concerns at a congressional hearing in 2010.

“The widespread use of dicamba is incompatible with Midwestern agriculture,” he said in his testimony. “Even the best, the most conscientious farmers cannot control where this weed killer will end up.” 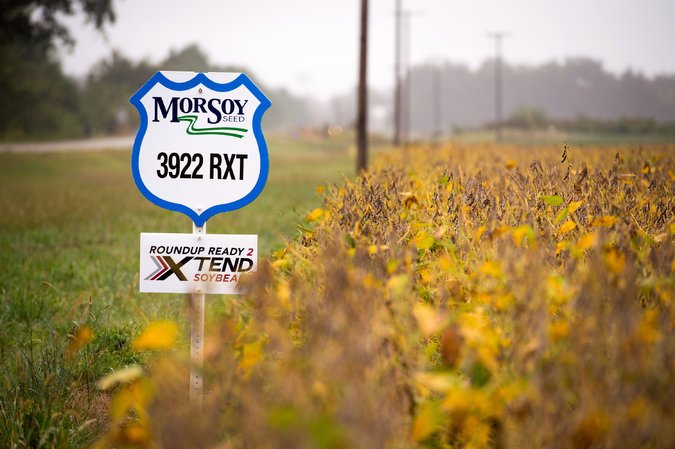 Xtend is a Monsanto brand of genetically modified soybean.

Monsanto eventually removed him from its advisory panel, citing what it called a “conflict of interest.” Mr. Smith had helped start a coalition of farm interests critical of dicamba and 2,4-D.

Mr. Partridge said such internal alarms had not been ignored.

“Those concerns are what led to us developing the low-volatility formulation” of the herbicide, he said.

Dicamba does kill weeds. Brent Schorfheide, a farmer in southern Illinois, said it had been extremely effective on those no longer responsive to Roundup.

“It cleaned everything up,” he said. “Without it, our fields would be a disaster.”

But some farmers say they face a difficult choice — either buy the new genetically modified seeds or run the risk that their soybeans would be damaged more by a neighbor’s spraying of weed killers than by the weeds themselves.

“If you don’t buy Xtend, you’re going to be hurt,” said Michael Kemp, a Missouri farmer, referring to the brand name of Monsanto’s seeds.

The leaves on his soybeans puckered and curled after they were exposed to dicamba, a problem known as cupping. The cost will not be clear until after harvest.

“You’re going to have to buy their product because their chemical is drifting around,” he said, adding that growing crops that are not modified is becoming impossible. “The people who are growing non-G.M.O., which I did for a while, they’re just left out in left field, I guess.” 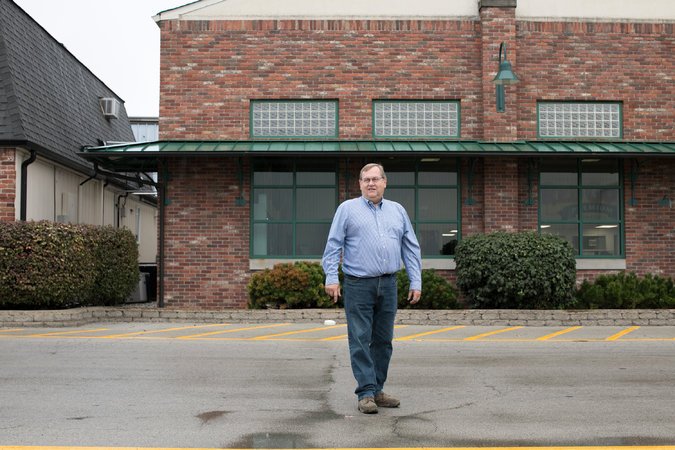 Steve Smith, a member of an advisory panel to Monsanto, spoke out against the weed killer dicamba, and the company removed him from the panel.

A pivotal debate centers on how damage is caused.

Monsanto cites particles that drift in the wind when the product is sprayed improperly or when unapproved versions of dicamba are used. That can be addressed through training and enforcement.

But another problem is as much to blame, many farmers and weed scientists say, one that raises questions about the entire product program.

Because genetically modified crops allow dicamba to be sprayed later in the year, after crops emerge from the ground, and in hotter and more humid weather, the chemical is susceptible to what is known as “volatility” — it can turn into a gas and drift onto whatever happens to be nearby.

While Monsanto and BASF modified the new versions of the herbicide they are selling, they have not entirely solved the problem. So much dicamba is being used that even a small percentage of drift can cause widespread damage.

Arkansas and Missouri said they were still investigating complaints. The Missouri Department of Agriculture referred questions on the extent of the crop damage to Kevin Bradley, a weed scientist at the University of Missouri, who said more than three million acres had been affected.

In an email, he said that particles drifting in the wind during spraying “may have been the largest reason, but not by much,” adding, “I believe similar or perhaps slightly lower percentages can be attributed to volatility.”

In a statement, the E.P.A. said, “This is still an ongoing investigation and we cannot speculate on what the underlying causes of damage may be.” 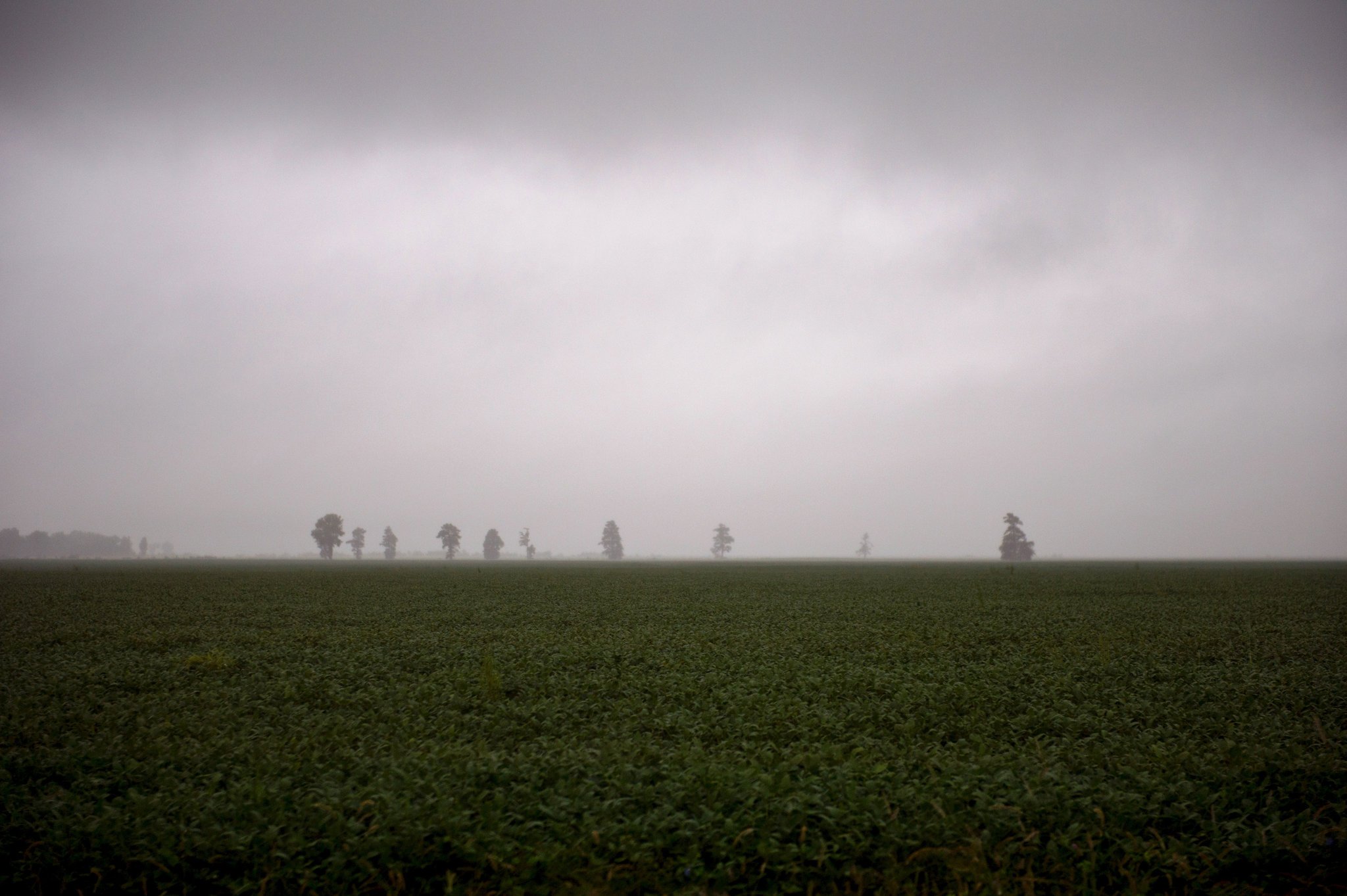 A field of soybeans in Missouri. Farmers who have not bought new genetically modified seeds say their crops have been damaged by weed killers sprayed by others that drifted onto their farms.

Odessa Hines, a spokeswoman for BASF, said, “There appears to be no single cause that explains all of the alleged symptomology,” adding, “We believe it’s premature to make final decisions.”

Monsanto has put the onus on farmers. In a letter to Arkansas’ governor last week, a top company executive said problems were “all readily correctable through additional training, education, and enforcement.” The company has already trained about 50,000 people to apply the weed killer properly.

The instructions are quite complex, discouraging spraying both when it is too windy or when it is not windy enough. Some farmers are chafing at the company’s approach.

“We may be rural hicks, but we’re not stupid,” said Kenneth Qualls, an Arkansas farmer who is a plaintiff in one of the lawsuits. “We know how to apply chemicals. They are going to blame it on the farmer to reduce their liability.”

Health risks are also a contentious topic. The industry says dicamba and 2,4-D are long established. But Charles Benbrook, a weed scientist partly funded by the organic industry, said, “For both dicamba and 2,4-D, the reproductive risks and birth defects” are “most worrisome.”

Dicamba is only one issue facing Monsanto. Public officials in Europe are divided about reauthorizing Roundup’s active ingredient, glyphosate. In the United States, Monsanto faces litigation over cancer claims related to glyphosate. That litigation has raised questions of ghostwriting of both journalism and academic papers by the company.

But dicamba is arguably the greatest challenge.

“It’s really divided the farming community,” Mr. Qualls said. The husband of one of his cousins was shot dead in a dispute over dicamba drift, underlining the bitterness of the issue. A farmhand has been charged with murder in the case.

“It shocked the whole community and really the whole state,” Mr. Qualls said, adding that he was surprised there hadn’t been more violence.

“Some of these people who got victimized by this product are probably going to go out of business because of it,” he said. “They’ll have to put up their equipment for auction, and the people bidding on it will be the ones who put them out of business.”

An earlier version of this article misstated the timing of Monsanto’s formal challenge to Arkansas’ ban of the weed killer dicamba. The challenge was made earlier in September, not last week.